How Would Local Integration Help To Ease The Plight Of Refugees?

by Sharon OtienoPublished 9 months ago

Have you ever wondered what the world would be like if all the displaced people from different walks of life would be able to fully integrate into host communities? A world where there is freedom of movement for all? A world where all residents of a country would have equal opportunities regardless of their background, live dignified lives and be able to contribute to social and economic development? I ask these questions to myself from time to time and wonder what things would look like if refugees were more able to fully integrate into their local communities in Kenya. This can be done through the process of resettlement, which allows refugees to gain more rights as a resident in their host country, or through the opening of the economy and society to allow refugees to easily contribute and thrive.

“Forced displacement globally is set to increase exponentially. Refugees have so much to offer both host communities and global society.”

The challenges of migration and integration have remained constant in our human history. Now more than ever people are being forced to seek asylum due to conflict, disaster, climate change and fear of persecution. Countries around the world have presented different responses to the refugee crisis, some of which are commonly known as the ‘durable solutions’. These are; voluntary repatriation to their countries of origin/ home country, resettlement to a country often in the Global North, and local integration into the country of asylum. In my opinion, we should look into and take all the necessary steps involved to make the latter option possible. Forced displacement globally is set to increase exponentially. Refugees have so much to offer both host communities and global society. However, there is an attitude of fear and resistance when it comes to integrating refugees into host communities, be it an uncertainty towards different cultures and religions, or simply a wariness about how refugee communities will contribute to the host society.

Host countries seem to forget that refugees have been productive members of the society in their counties of origin. Refugees are teachers, doctors, nurses and carpenters. These are all useful skills for our growing economy. Kenya does indeed have very high levels of unemployment, and in many instances already marginalised host community members will turn to blame the influx of refugees on the lack of employment opportunities. However, refugees are often highly skilled resourceful members of society whose socio-economic benefit often goes unrecognised. All members of society should be given the same opportunities to contribute to the development of our country. If given the opportunity to integrate and belong, refugees can become self-reliant and will be able to contribute socially and economically in their new communities. I would like to think that a well put together strategy will enable refugees to give back to their new communities and become employers and tax paying citizens to transform the view of them being a burden.

It’s impossible to ignore the economic growth in areas that currently host the majority of the refugee communities. For instance, look at Eastleigh in Nairobi, also referred to as “Mogadishu ndogo” (little Mogadishu)  because it is heavily inhabited by people of Somali origin. It is a huge economic hub and though it is difficult to know exactly how much money exchanges hands, according to Nashon Nyagha in the National assembly official records (2000) 47% of Kenya’s GDP came from Nairobi, of which the Eastleigh constituency contributed the second greatest amount. An article by Jake Flanagin points out that “it’s estimated that the malls in Eastleigh alone contribute more than $7 million a year to the economy“. Research also shows that in Kakuma, a large refugee camp in Northern Kenya, there’s a vibrant informal economy with more than 2000 businesses. The International Finance Corporation’s study titled ‘Kakuma as a Marketplace,’ indicated that ‘the total consumption is at $56 million. The camp, with 160,000 registered inhabitants at the time of the survey, spends KES 1.7billion ($16.5 million), while the town with a population of about 60,000 spends KES 4.1 billion ($39.7 million).’  The Kenyan, Danish and Norwegian governments also showed that Dadaab refugee camp in Kenya had an annual internal economy of roughly $25million and injected an additional $14million into the surrounding community. It should not be forgotten that refugee hosting countries gain huge sums of financial support from other countries. It’s estimated that Kenya has received about $111.1 million for protection and provision of basic services for refugees. If used properly, this can improve the infrastructure in the hosting areas, such as schools, hospitals and even roads that are open for use by both the refugees and the local Kenyans. 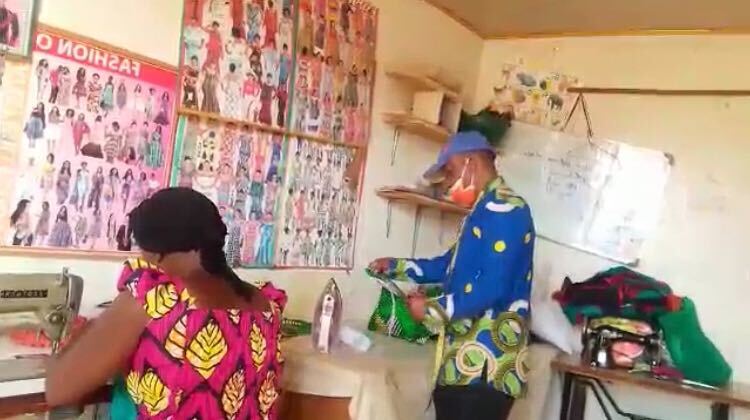 Our CBO partner, L’Afrikana, in action producing masks to distribute freely to their community, thus displaying the value Refugee-led organisations can have on their host countries.

During my time working at Xavier Project, I have witnessed first-hand the amazing contributions that refugees can make to their host communities. Working with refugee-led community-based organisations I have watched refugees mobilise and positively contribute to their local communities to lead change. Tenda Wema, a community-based organisation in Kitengela (Nairobi), has stepped up to mobilize all the resources in their community especially during the ongoing COVID-19 pandemic. They have been on the front lines making sure both the host and refugee in their community don’t lack basic needs. L’africana, another refugee-led organisation in Nairobi, has also made positive contributions in the fight against COVID-19 by making face masks using the labour of skilled tailors from the refugee community. In addition, they have also been playing a huge role in the sensitization of the refugee and Kenyan community in the fight against COVID-19.

In my opinion, local integration has such a huge potential to resolve the plight of refugees across the world. There are so many examples of refugees who have been integrated fully into their new societies that prove that if the right steps are taken then this solution would help resolve a lot of problems the refugees face. Most importantly it gives refugees a sense of purpose and belonging. There are several case studies where local integration has worked. In Tanzania, in the 1970, about 170,000 refugees from neighbouring Burundi were integrated, whereby each family was allocated five hectares of land. It was reported that food crops grown by these communities make up one third of the agricultural produce. Another example is that of Sierra Leone, where in 2008 the government launched a strategy for self-reliance and local integration of Liberian refugees. Refugees should enjoy the right to freedom of movement and to work. These are rights which are violated and overlooked when refugees are just confined to camps.

Check out the other blogs on our website, where you can find regularly updated pieces about the work we do, and why its important.